Gillie and Marc on Run for your Life

Home / Blog / Gillie and Marc on Run for your Life 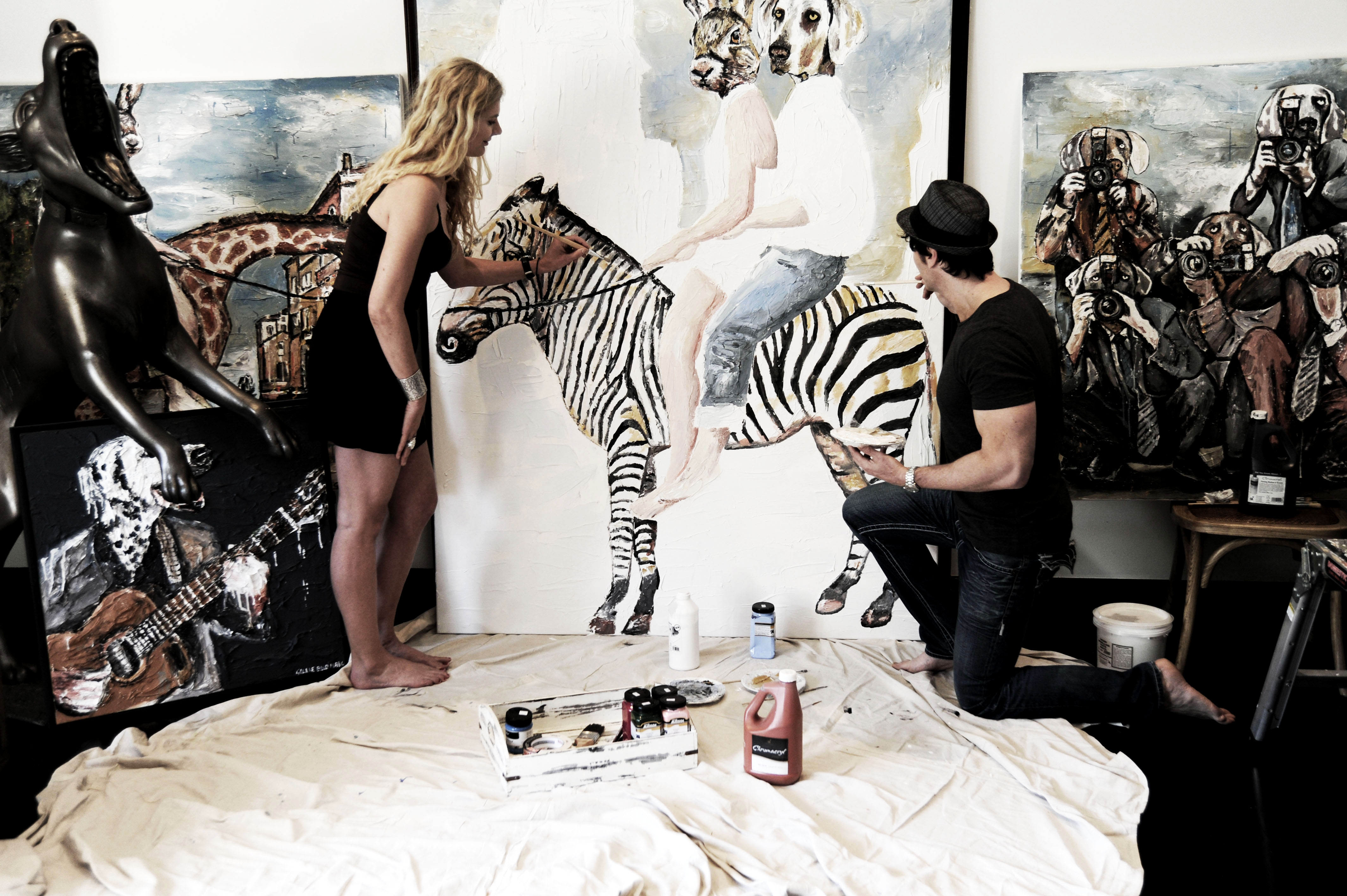 “The world depends on contemporary artists to challenge life as we know it. We, the contemporary artist pull apart the world, so it can be put back together as something different”
As husband and wife, Gillie and Marc are Australian contemporary artists who collaborate to create art as one, applying the iconic imagery of the dog/human hybrid to celebrate the powerful spiritual relationship that exists between man and animal. Gillie and Marc reference their own remarkable love story in their works, perpetuating a pursuit of happiness and encouraging us to challenge the status quo and the perceived safety of societal convention. Gillie and Marc’s unparalleled love is the cornerstone of what they are and of what they create. Meeting in Hong Kong, she was a nurse from England and he, a boy from the ‘burbs’ of Melbourne. Wanting only to find a soul-mate with which to share their passions for art, travel and adventure, seven days later they were married at the foothills of Mount Everest. They not only share an unsurpassed dedication to their art but also love for their two children, whom Gillie describes as their ‘best friends’. With a 20 year history of collaboration, Gillie and Marc’s works (paintings and sculptures) have received acclaim worldwide and are held in collections both nationally and internationally. Together, they have exhibited their art all over the world, with over thirty solo exhibitions. They have been Archibald Prize finalists, won the Chianciano Biennale in Italy and have been crowd favourites in Bondi’s Sculpture by the Sea. 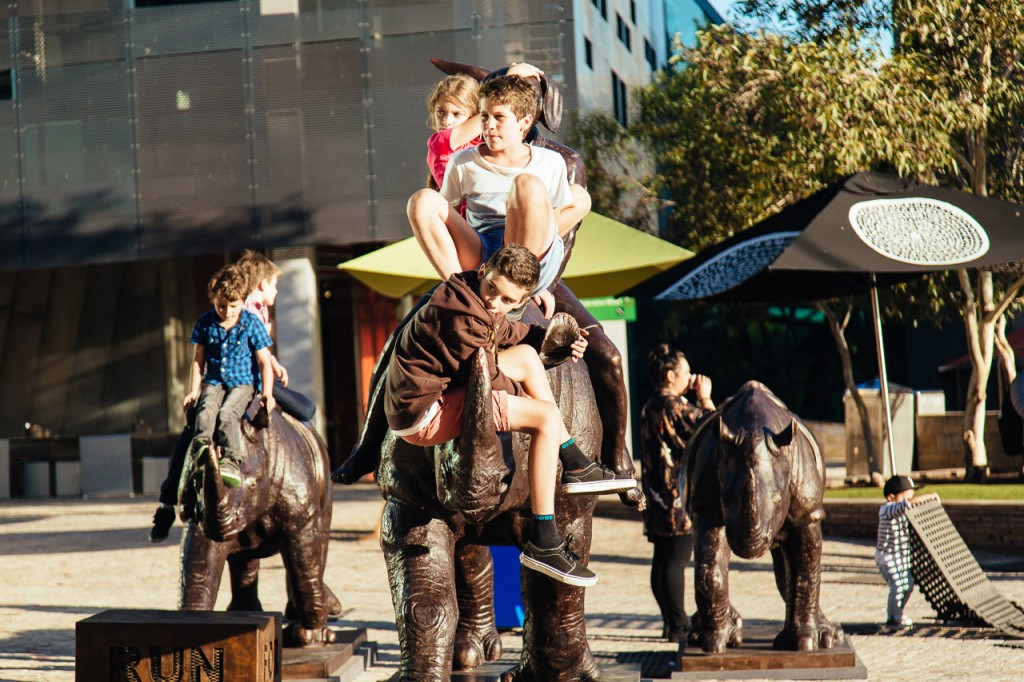 Run for your Life at Fed Square early in 2014

Gillie and Marc on Run for your Life – “We were inspired to make Run for your Life after finding out that 2013 was one of the bloodiest years ever for African rhinos, with over 1000 killed by hunters and poachers. With these sculptures we hoped to raise public awareness of the plight of rhino species in the wild. Now critically endangered, rhinos desperately need the active involvement of everyone to save their lives. Our hope is that everyone who sees Run for your Life can feel a connection to the rhinos and to their future. The installation first appeared in Federation Square at the beginning of 2014 where they received an incredibly warm reception from the people of Melbourne. We were expecting a positive response but nothing like the response we have received so far. Hundreds of thousands of people want to climb, touch, cuddle and ride the rhinos. Wonderment Walk then gave our rhinos a new lease on life by exhibiting them at Summersalt Festival this year, and we’ve been so delighted to see pictures of people riding the rhinos and enjoying art in a public space. We had an opportunity to place the sculptures elsewhere but the very idea of them being given back to Victoria and now finding a home at Latrobe University makes us really proud.” 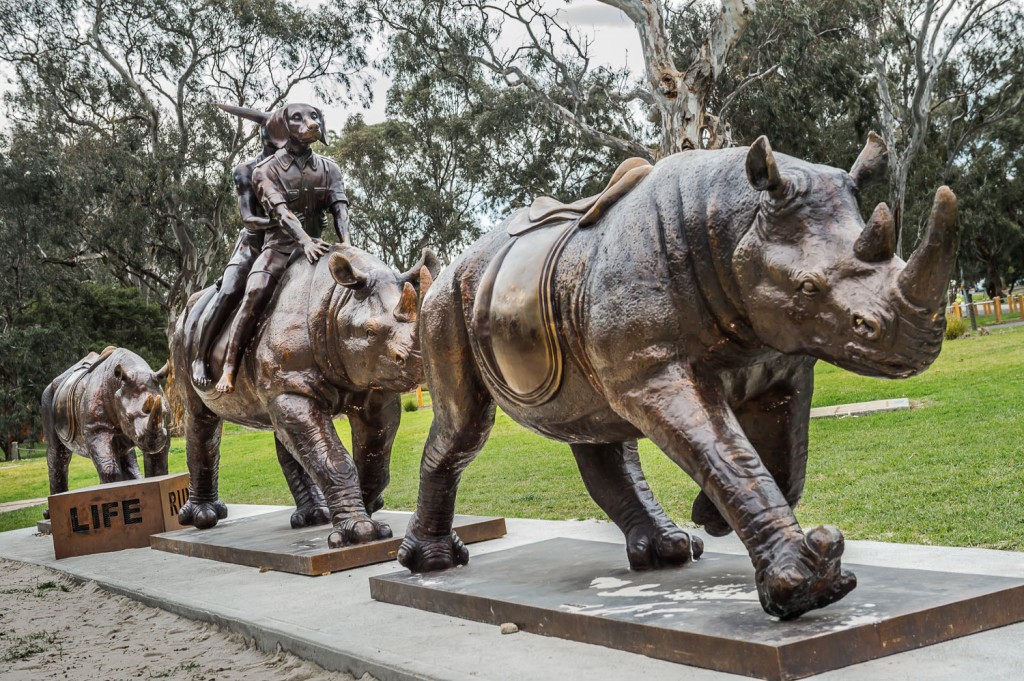 Gillie and Marc on Wonderment Walk Victoria – “The work that Wonderment Walk does in bringing art to the public in ways that are engaging, interactive and innovative is something we really believe in. It meant so much to us for an organisation like Wonderment Walk to acquire our work, because they truly believe in giving art a public platform that is accessible to absolutely everyone.” Coming Up Check out this rug rat braving a Run for your Life ride at our official unveiling at La Trobe University Bundoora. The special VIP event happened on Thursday 24 September – a stunning Spring day. Don’t forget to follow us on Facebook, Twitter or Instagram for updates on the wrap up. We’ll be speaking to some of our guests about what went down including a special video from Gillie and Marc the delicious hazelnut pastries consumed. 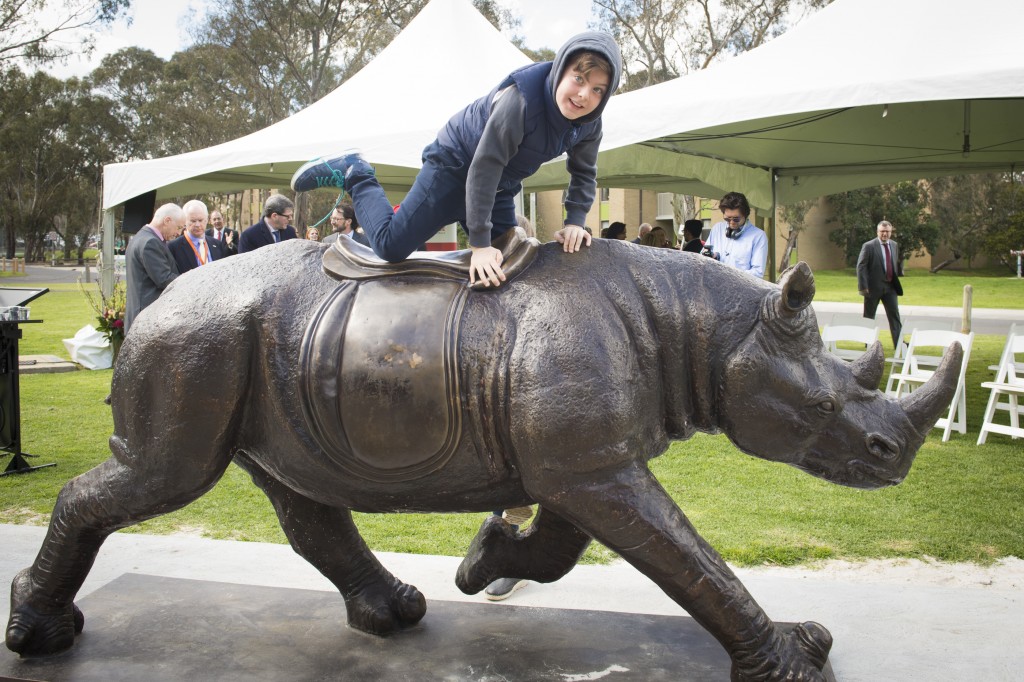 Exactly what these rhinos were created for, PLAY!